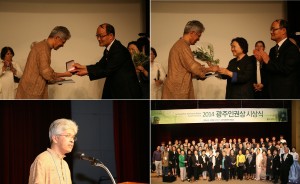 The committee of Gwangju Prize for Human Rights 2014 announces that Mr. Adilur Rahman Khan, who has devoted himself to the protection of constitutional rights, establishment of the Human Rights Act, and protection of human rights; and the Mothers of Khavaran, a body composed of the mothers of political prisoners in Iran seeking justice and human rights, as the co-laureates of the year 2014.

Mr. Adilur Rahman Khan first started his human rights advocacy as a student and after becoming a human rights lawyer he founded Odhikar – a leading Bangladeshi Human Rights organization. Since then he has contributed to the protection and promotion of human rights. Although this has exposed himself to surveillance and monitoring by the Bangladeshi government as well as numerous threats, Adilur Rahman Khan continues to play a key role in campaigning against infringement of human rights in South-Asia, including extrajudicial killings, enforced disappearances, torture and inhumane degrading treatment inflicted by law enforcement agencies. His efforts resulted in the formation of a National Human Rights Defenders Network in Bangladesh and a South-Asian network against Torture and Impunity.

The Mothers of Khavaran is a historic human rights group of Iranian women, who for the last 26 years have traced the names of those responsible for the abuse of human rights but were not held accountable, and demanded appropriate legal actions. This organization was founded at the Khavaran Cemetery in 1988, in memory of those secretly executed by Islamic Republic’s judiciary officials during the 1980’s, particularly, the mass executions in 1988. The Mothers of Khavaran has constantly pressed the Islamic Republic officials for ‘Investigation of the Truth’ and ‘Punishment of the person in charge’, for the thousands of cases of their loved ones being detained, executed, and then buried secretly in a desolate piece of land in the south of Tehran. While some Islamic Republic officials deny these executions and treated them with humiliation, assault, arrest and abuse, they have strongly carried on with their quest for accountability. Despite the silence by the Islamic Republic, the constant pursuit of justice and accountability has led to a rise in expressing political dissidents, progress in investigation of state excesses and fair judicial trial, and expansion of human right activists’ advocacy.

It is the most earnest desire of the committee of Gwangju Prize for Human Rights 2014, to see human rights activists to not encounter suppression and death threats, and also see the societies where the prize laureates are currently in campaign, develop an environment where human rights are respected. In addition, comprehensive fact-finding and legal actions on the person in charge must proceed as proposed by five principles for the Gwangju Resolution and as universal principles according to the UN Human Rights Commission. The committee of the Gwangju Prize for Human Rights 2014, gives full support and encouragement for regaining the damaged reputation, lost compensation, and for commemoration of the sacrificed. The committee sincerely hopes that the sacrifice and courage shown by this year’s Gwangju Prize for Human Rights laureates, Mr. Adilur Rahman Khan and the Mothers of Khavaran, become a guiding light for those countries and individuals suffering a lack of freedom and human rights abuses.

Chair of Committee
In Jae-keun (Member of National Assembly)