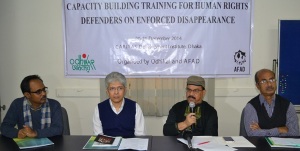 Enforced disappearance is a particularly heinous human rights violation, which is considered a crime against humanity as defined in the Rome Statute of the International Criminal Court (ICC). The crime of enforced disappearance is deeply rooted in an exploitative and oppressive system that breeds poverty and violates basic human rights. It is an instrument of repression resorted to by a government whose policies are opposed or assailed by critical members of society. It is often committed on the pretext of maintaining peace and order and protecting national security from those conveniently labeled as ‘enemies of the State’.

In order to prevent this crime, Odhikar, being a member of the Asian Federation Against Involuntary Disappearances (AFAD), has been working against enforced disappearance and consistently campaigning for the ratification of the International Convention for the Protection of All Persons from Enforced Disappearance. As part of this campaign Odhikar, in collaboration with the Asian Federation Against Involuntary Disappearances (AFAD) organised a two-day capacity building training course for human rights defenders on enforced disappearance. The training programme was held in the CARITAS Development Institute in Dhaka on 20-21 December 2014. Twenty participants, mainly human rights defenders from different districts of Bangladesh; and members of the victim families attended the training. The training programmes were aimed to equip human rights defenders on the methods and techniques necessary for working on this issue.