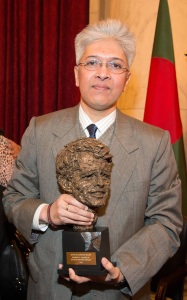 “There is no more fitting tribute to my father than the presentation of this award to Adilur Rahman Khan,” said Kerry Kennedy, President of the RFK Center. “Robert Kennedy would have admired Adil’s courage and persistence in documenting his government’s complicity in a wide range of human rights abuses. We are inspired and humbled by his work to improve the lives of all Bangladeshis, and we are proud to honor him with the 2014 Robert F. Kennedy Human Rights Award.”

Mr. Rahman Khan was selected from a group of 70 nominees after a months-long process by a prestigious panel of judges that consisted of: Dean Claudio Grossman, Professor of Law and Dean of American University, Washington College of Law; Ms. Maria Otero, former Under Secretary of State for Civilian Security, Democracy and Human Rights; and Dr. William Schulz, President and CEO of the Unitarian Universalist Service Committee.

“I thank the Robert F. Kennedy Center for Justice and Human Rights for honoring me with this prestigious award,” said Mr. Rahman Khan. “This award is an acknowledgement of the tireless work of human rights defenders presently at risk. The people of Bangladesh joined the liberation struggle in 1971 to establish a democratic country, based on equality, human dignity and social justice. Their dreams remain unfulfilled, as they now face extra judicial killings, enforced disappearances and torture and ill treatment in custody. Human rights defenders are persecuted and the freedoms of media and association are curtailed. This award will contribute to highlight these violations in my country; and will encourage and empower the human rights defenders and victim families associated with Odhikar to continue the struggle for human rights, social justice and democracy.”

The Robert F. Kennedy Human Rights Award was established in 1984 to recognize those individuals who stand up to oppression at grave personal risk in the nonviolent pursuit of human rights. The Human Rights Award Laureates have made significant contributions to their countries through years of dedicated work. Laureates are chosen through an exhaustive annual nomination and selection process with nominations submitted from all over the world.

About the Robert F. Kennedy Center for Justice and Human Rights

The Robert F. Kennedy Center for Justice and Human Rights was founded by Robert Kennedy’s family and friends in 1968 to continue his work for a more just and peaceful world. The RFK Center joins front line defenders in advocacy and litigation; partners with teachers to educate students about human rights; and engages the financial community about sustainable investing.

The Robert F. Kennedy Center for Justice and Human Rights is a 501 (c) (3) nonprofit charitable organization.

Report Published on November 20, 2014 at www.rfkcenter.org

Video Published on November 20, 2014 at www.summitwebcasting.com