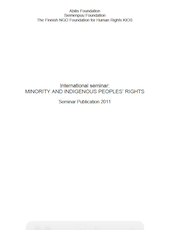 Abilis Foundation, the Finnish NGO Foundation for Human Rights KIOS and Siemenpuu Foundation organized an international seminar Minority and Indigenous Peoples’ Rights on 4–5 October 2011 in Helsinki. This was the first time when the three NGO foundations organized a seminar as a joint effort. The seminar aimed to increase awareness of people working and interested […]